Results of the trial — presented during the virtual ASCO Annual Meeting — may indicate a role for the CAR T-cell therapy as an effective bridging strategy before hematopoietic stem cell transplant, according to the researchers. 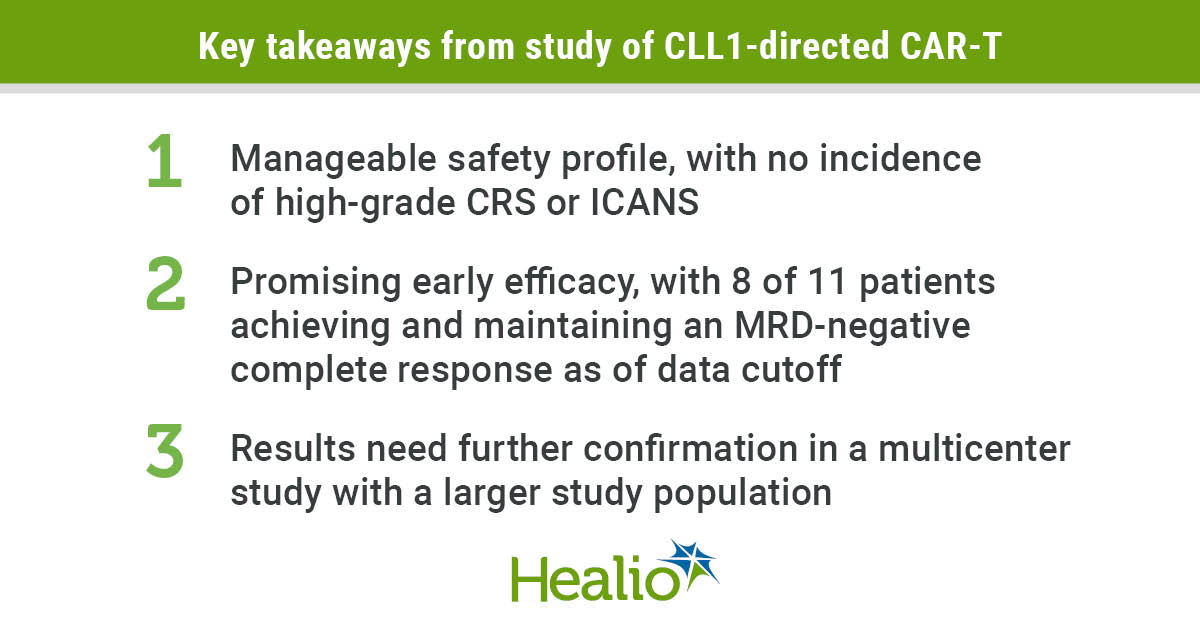 “Outcomes of children with acute myeloid leukemia lag behind those of children with acute lymphoblastic leukemia, with 5-year DFS varying between 33.3% and 79.5% worldwide, as reported by the CONCORD-3 study,” Hui Zhang, MD, PhD, chief physician at Guangzhou Women and Children's Hospital in China, told Healio. “For those patients with refractory and/or relapsed disease, the prognosis is dismal.”

“CLL1 is highly expressed on AML leukemia stem cells, the majority of AML blasts and normal myeloid cells, but not on normal hematopoietic stem cells or lymphoid cells, suggesting that CLL1 is a promising target for novel AML therapy that will not affect normal hematopoiesis and lymphocyte-directed immune function,” Zhang said, adding that several preclinical studies have demonstrated the antitumor efficacy of targeting CLL1 in humanized models.

Patients received the dual-targeted CLL1/CD33 CAR T cells if they had lower expression of CLL1, Zhang told Healio. In each case, he added, the scientific team discussed the proper construct to use before proceeding to CAR T-cell therapy for AML.

Patients received a lymphodepletion chemotherapy regimen of cyclophosphamide and fludarabine, followed by a single IV infusion of 0.3 × 106/kg to 1 × 106/kg CAR T cells.

Results showed all 11 patients had mild (grade 1 or grade 2) CRS; however, no patient experienced grade 3 or higher CRS. Additionally, researchers reported no incidence of immune effector cell-associated neurotoxicity syndrome and no dose-limiting toxicities so far in the study.

Two patients who received the CLL1/CD33-directed CAR had MRD-negative complete responses within 30 days of infusion, whereas the other patient who received the bispecific CAR-T did not respond to therapy.

All patients who had no response, partial response or an MRD-positive response to CAR T-cell therapy went on to achieve MRD-negative remission after HSCT. All but two patients — one who died of graft-versus-host disease after transplant and another with stable disease who died of a lung infection 2 months after CAR-T — maintained an ongoing response to therapy as of the data cutoff date.

How effective an option is more uncertain at this point due to the small number of patients treated so far in the study, he added.

Read next
CAR-T safe, effective for patients with advanced ALL after allogeneic HSCT
The Leukemia & Lymphoma Society awards $13.8 million for research into pediatric blood cancers

Zhang and colleagues have demonstrated efficacy using both CLL1 and CLL1/CD33 CAR T cells. The investigators chose CLL1 as a target because it is a stem cell-associated antigen; therefore, it is present on AML cells and AML leukemic stem cells. In addition, there is little to no expression of CLL1 on normal hematopoietic stem cell progenitors.

Although the rationale was unclear for choosing who would receive dual- vs. single-targeted CAR T cells, the results are quite promising. First, the manufacturing time was relatively short at approximately 3 weeks, including quality assurance. There also was no incidence of manufacturing failure.

The safety profile was largely consistent with what we have become accustomed to when using CAR T cells for B-cell malignancies. There was no evidence of long-term hematopoietic aplasia; however, all patients experienced severe myelosuppression, although the duration was unclear.

All three patients treated with the bispecific CLL1/CD33 CAR-T experienced some form of hepatotoxicity, but we have become accustomed to this when using CD33-directed monoclonal antibodies.

There was striking and remarkable efficacy in this population of patients with heavily refractory and pretreated disease. Efficacy in this study appeared to be independent of CLL1 expression, AML subtype or cytogenetics, disease burden, or CAR T-cell dose. This therapy also appeared to be an important bridge to allogeneic HSCT, with five of eight patients treated with the CLL1 CAR-T proceeding to transplant, four of whom remained in remission at the time these data were presented. All patients treated with the bispecific CAR-T who went on to HSCT remained in MRD-negative remission, as well.

These results are largely consistent with and expand upon previous reports of effective MRD-negative remissions with both CLL1 and CLL-1/CD33 CAR T cells. It's exciting to see these results reflected in pediatric patients. What remains to be determined is whether these treatments can lead to long-term remissions.